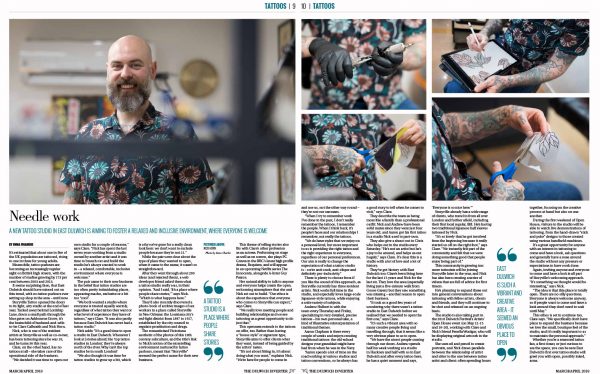 Our excellent free local paper The Dulwich Diverter were kind enough to not only feature Storyville Tattoo in the latest issue but even put our very own Nick Horn on the front page! We’ve got the article below for anyone unlucky enough to not live in East Dulwich so grab a cup of tea and get comfy!

A new tattoo studio in East Dulwich is aiming to foster a relaxed and inclusive environment, where everyone is welcome

It’s estimated that about one in five of the UK population are tattooed, rising to one in three for young adults.

Meanwhile, tattoo parlours are becoming an increasingly regular sight on British high streets, with the number of studios growing by 173 per cent between 2003 and 2013.

It seems surprising then, that East Dulwich should have missed out on this trend, with no tattoo parlours ever setting up shop in the area – until now.

Storyville Tattoo opened the doors to its light, airy studio at the end of last year. Tucked away behind Lordship Lane, down a small path through the blue gates on Ashbourne Grove, it’s the brainchild of husband-and-wife to-be Clare Calbraith and Nick Horn.

Nick, who is one of the resident artists at Storyville as well as co-owner, has been tattooing since he was 18, and he turns 36 this year.

Clare, on the other hand, has no tattoos at all – she takes care of the operational side of the business.

“We decided it was time to open our own studio for a couple of reasons,” says Clare. “Nick has spent the last seven years working from a studio owned by another artist and it was time to branch out and build the studio he’s always wanted to work in – a relaxed, comfortable, inclusive environment where everyone is welcome.”

The pair came to their new business in the belief that tattoo studios are too often pretty intimidating places, appearing macho, exclusive or a bit too “cool”.

“We both wanted a studio where everyone is treated equally warmly, regardless of what tattoo they want or what level of experience they have of tattoos,” says Clare. “It was also partly because East Dulwich has never had a tattoo studio.”

Nick adds: “It’s a good time to open a studio in East Dulwich. Whenever I look at [stories about] the ‘top tattoo studios in London’, they’re always north of the river. Why can’t the top studios be in south London?

“We also thought it was time for tattoo studios to grow up a bit, which is why we’ve gone for a really clean look here: we don’t want to exclude people because they’re not 21.”

While the pair were clear about the type of place they wanted to open, when it came to the name, it wasn’t so straightforward.

After they went through about 200 ideas (and rejected them), a web developer friend asked them what a tattoo studio really was, in their opinion. “And I said, ‘It’s a place where people share stories,’” says Nick. “Which is what happens here.”

They’d also recently discovered a photo-book of archive images of sex workers in a place called Storyville in New Orleans: the Louisiana city’s red-light district from 1897 to 1917, established by the city council to regulate prostitution and drugs.

The romanticised Victoriana aesthetic of the photos of this 19th century subculture, and the title’s link to Nick’s notion of the storytelling environment nurtured by tattoo parlours, meant that “Storyville” seemed the perfect name for their new business.

This theme of telling stories also fits with Clare’s other profession as an actress. Performing on stage as well as on screen, she plays PC Graves in the BBC’s latest high profile drama, Requiem, and will appear in an upcoming Netflix series The Innocents, alongside A-lister Guy Pearce.

Her natural ability to talk to anyone and everyone helps create the open, welcoming atmosphere that she and Nick set out to build. “Our ethos is about the experience that everyone who comes to Storyville can expect,” says Clare.

“We really love meeting people and building relationships and we see tattooing as a great opportunity to do just that.”

This openness extends to the tattoos on offer, too. Rather than having a “house style” or signature type, Storyville aims to offer clients what they want, instead of being guided by the artists’ tastes.

“It’s not about fitting in, it’s about doing what you want,” explains Nick. “We’re here for people to come in and use us, not the other way round – they’re not our canvases.

“We do have styles that we enjoy on a personal level, but more important to us is providing the right tattoo and the right experience to everyone, regardless of our personal preferences. Our aim is really to change the expectation of what a tattoo studio is – we’re anti-snob, anti-clique and definitely pro-inclusivity.”

There is plenty to choose from if you like the sound of this approach, as Storyville currently has three resident artists. Nick works full time in the studio, and especially loves large-scale Japanese-style tattoos, while enjoying a wide variety of subjects.

Andrew Hulbert is with the team every Thursday and Friday, specialising in very detailed, precise tattoos – his own personal take, a kind of illustrative reinterpretation of traditional themes.

Aaron Clapham is there every couple of weeks and enjoys creating traditional tattoos: the old-school designs your granddad might have had from when he was in the Navy.

“Aaron spends a lot of time on the road working at various studios and tattoo conventions, so he always has a good story to tell when he comes to visit,” says Clare.

They describe the team as being more like a family than a professional outfit: Nick and Andrew have been solid mates since they were just four years old, and Aaron got his first tattoo in a studio Nick used to part-own.

They also give a shout-out to Chris who helps out in the studio every Saturday. “He’s not an artist but he’s a joy to be around, and helps us out hugely,” says Clare. It’s clear this is a studio with a lot of love and a lot of history.

They’ve got history with East Dulwich too: Clare’s been living here for the last 13 years and Nick for the last six. They love the area (especially living just a five-minute walk from Goose Green) but they saw something was missing – another reason to open their business.

“It took us a good few years of wondering why there wasn’t a tattoo studio in East Dulwich before we realised that we needed to open the first one,” says Clare.

“It’s such a vibrant area with so many creative people living and travelling through, that it seems like a very obvious place to us to open.

“We have the nicest people coming through our doors. Andrew spends half his week working at a studio in Hackney and half with us in East Dulwich and after every tattoo here, he has a quiet moment and says, ‘Everyone is so nice here.’”

Storyville already has a wide range of clients, who travel in from all over London and further afield, including their first local regular, Bill. He’s having two traditional Japanese half sleeves tattooed by Nick.

“It’s so lovely that he got involved from the beginning because it really started us off on the right foot,” says Clare. “We instantly felt part of the community and felt that we were doing something good that people enjoy being part of.”

This community is growing too: more tattooists will be joining Storyville later in the year, and Nick has also been creating a series of videos that are full of advice for first timers. He’s planning to expand these out into general conversations about tattooing with fellow artists, clients and friends, and they will continue to be shot and released on an ongoing basis.

The studio is also taking part in the 2018 Dulwich Festival’s Artists’ Open House event (on May 12-13 and 19-20), working with Clare and Nick’s friend Fenella Woolgar, who will be displaying original artwork in the studio.

She uses oil and pencil to create portraits, and Nick draws parallels between the relationship of artist and sitter to the one between tattoo artist and client: often spending hours together, focusing on the creative process at hand but also on one another.

During the first weekend of Open House, visitors to the studio will be able to watch live demonstrations of tattooing, from the hand-drawn “stick and poke” designs to those created using various handheld machines.

It’s a great opportunity for anyone with an interest in tattooing to come and have a look, ask questions and generally have a nose around the studio without any pressure or expectations to have work done.

Again, inviting anyone and everyone to come and have a look is all part of Storyville’s welcoming approach. “It’s something we thought would be interesting,” says Nick.

“The idea is that this place is totally open. There are no silly questions. Everyone is always welcome anyway, so if people want to come and have a look around they don’t need to wait until May.”

This ethos is set to continue too, Clare says. “We specifically don’t have plans to expand the business because we love the small, boutique feel of the studio, and it’s really important to us to maintain the personal approach.”

Whether you’re a seasoned tattoo fan, a first-timer, or just curious to see the space, you can be sure East Dulwich’s first ever tattoo studio will greet you with open, possibly inked, arms.

A huge thanks to The Dulwich Diverter from everyone at Storyville Tattoo!